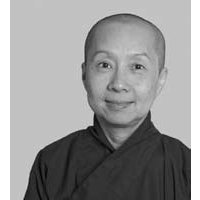 Sister Song Nghiem, Adorment with Parallel, was born in Vietnam. She received her PHD in chemistry from Darmstadt Technical University. She subsequently worked as a chemist in research and in industry. In 2003 Thay appointed her as a lay Dharma Teacher and a year later she was ordained as a nun by Thay. In 2012 she once again received the Dharma teacher lamp, this time as a nun. Her special interest is Tai Chi.