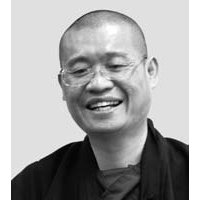 He received a Bachelor of Science (BS) in Chemical Engineering from the University of Texas in Austin in 1985. At the California Institute of Technology (Caltech), he received a Master of Science (MS) in Chemical Engineering in 1988 and a Ph.D. in Applied Mathematics in 1990. He was a Research Fellow at ARCO Oil and Gas Research Center in Plano, Texas and worked as a Postdoctoral Research Assistant in the Mechanical Engineering Department at the Massachusetts Institute of Technology (MIT) before being ordained as a novice monk in 1992.

He received his Bhikshu Ordination in 1994 from the Zen Master Thích Nhất Hạnh at the (Hương Tích) Fragrant Mountain Great Ordination Ceremony in Plum Village, France. In February 1999, the Zen Master transmitted the Dharma Lamp to the Venerable Pháp Ấn.

He had the honor to represent the Zen Master and the Plum Village tradition at the Millennium World Peace Summit of Religious and Spiritual Leaders organized at the United Nations headquarter in New York in 2000 and at the First World Buddhist Forum organized in Hangzhou City and Zhoushan City, Zhejiang Province, China, in 2006.

He helped to negotiate with the Vietnam government for the Zen Master’s returning and teaching trip to Vietnam in 2005 after the master’s 39 years in exile in the West. In 2007 he helped to organize the Great Requiem Ceremonies to heal the wounds of the Vietnam War. In December 2014, together with Sr. Chan Khong, he had the honor of representing the Zen Master in the Vatican at the Joint Declaration of Religious Leaders against Modern Slavery organized by Pope Francis.

Since 1995, he has led many retreats worldwide by himself and with Zen Master Thích Nhất Hạnh.

Since 2008 he is the Director and Dean of Studies at the European Institute of Applied Buddhism (EIAB) in Germany. He helps many people to open their heart, to transform fear and other negative emotions.

His research interests are in the fields of Historical Buddha, Historical Jesus Christ, the development of Buddhist Meditation and Thought, Early Buddhism, the formation of Zen Buddhism, Buddhist Psychology, Integrative Medicine and Neuroscience with their applications to support the well-being of people of our time. He also studies, practices and enjoys to share with others different forms of qigong and taichi.