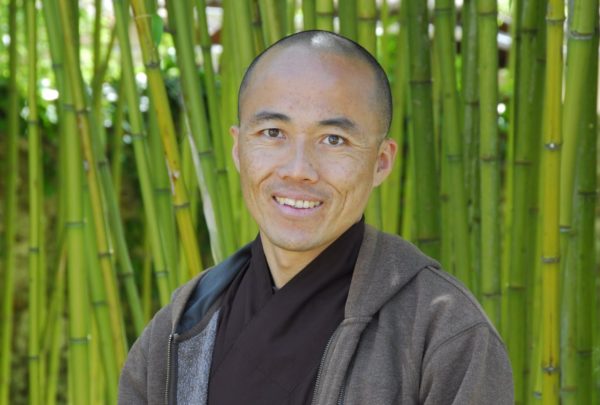 Brother Pháp Dung is a Vietnamese American monk, ordained by Thay in 1998. He was born in Vietnam in 1969, came to the US when he was nine years old. He received a professional BA in Architecture from the University of Southern California and worked as an architect/designer for four years before becoming a monk. He enjoys playing, learning and sharing mindfulness with children of all ages.
He helped to establish Deer Park Monastery and many other US centers, creating meditation programs and retreats for children, teens, families, and young adults, as well as planning its halls and infrastructures, and has been the abbot of the monastery since 2002. He received the Lamp Transmission from Thích Nhat Hanh and became a Dharma Teacher in 2004. He has led mindfulness retreats in North and South America, China, Hong Kong, India, Bhutan and Germany. He is most inspired by meditation as a method of examining and cultivating the mind, of the individual and of the collective; and by community building as a method to heal and develop society.
His current interest involves developing the Wake Up Schools Initiative to bring mental cultivation into all levels of education and collaborating with other institutions and individuals interested in mindfulness and education. One of his deepest aspirations is to create a mindfulness school where all members of the school from the students, teachers, principals, administrators and parents are all practitioners of mindfulness.